Advanced Design’s line of total data-erasure products offers just the right erasure method for each media type and whether or not the media will be re-used.

Erasure of data from recyclable devices 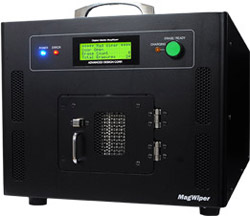 Because data are cleared instantly, large numbers of hard drives, magnetic tapes, floppy disks and other magnetic media can be rapidly sanitized. Data can also be erased from the platters of damaged hard disks that are no longer operable. Models are available for erasing data from notebook PCs without having to extract the hard drive.